Lessons from the final days with my mother

My mother was contemplative in her own way. A year before she died, she sent me a classic little poem she had written which was so pure and sweet that it still brings tears of wonder to me. It was probably the premonition of her own departing.

Lessons from the final days with my mother

My mother was contemplative in her own way. A year before she died, she sent me a classic little poem she had written which was so pure and sweet that it still brings tears of wonder to me. It was probably the premonition of her own departing.

My mother was a contemplative in her own way. A year before she died, she sent me a classic little poem she had written which was so pure and sweet that it still brings tears of wonder to me. It was probably the premonition of her own departing.

Sunday Evening at my Sunset Window

The new moon has set behind the fading sky:
What joy and beauty, purity and love
Does spread through the cool air of autumn now …
If such delight can this poor earth show forth
What unimagined ecstasy awaits our eager spirits
Beyond the brief parenthesis of mortal being.

Her death, seven years after my father went, was different. This time, I was to be called in time to help care for her in the last weeks of her life. That was such a privilege. It started the night before I heard the news that she was dying. I had an amazingly clear dream about my father. I didn’t recognise the vital young man walking towards me in the dream until the last minute and then, with a sudden glad recog­nition, I flung my arms about his neck, ‘Daddy!’

When my sister called me the next day from New Zealand to tell me of mother’s imminent demise, I knew that the dream and the news of my mother’s dying were a part of the seamless pattern of spiritual con­nections that bound us together. I couldn’t wait to tell my mother that I had seen Daddy and how well he looked. I worried all the way over the Tasman whether she would still be alive. As soon as I arrived at her bedside, I knelt down and told her about the dream. She looked at me with the old glimmer of delighted enthusiasm that was so much a part of her best self, and nodded vehemently, as if to say, ‘I know … I know … he has been to see me too!’

The family gathered together for these last days of caring, and my mother was able to stay in her own bed and room in the hostel that had been her home for the last few years of her life. For the first time in her long life, she had a young lady doctor who paid her the respect she deserved and gave her information and choices about where she wished to be. So we rostered ourselves around the clock and cared for her.

The family and friends at the hostel were eager to find out from me what we should do about certain aspects of her nursing care. Because they saw me as the expert in the field of care of the dying, they asked my advice. My mind went quite blank, and I recognised that there was some incongruity about my reaction. I needed to go away and think about it.

Here I was, coming straight from being the expert nurse car­ing for other people’s dying relatives, but somehow, when it came to my own mother, I was speechless. I knelt down in the privacy of my bed-room and asked God to show me what to do. The answer came in that clear, still voice in my head and heart that I recognised from previous critical answers to prayer: ‘Do you want to be the nurse, or the daugh­ter, for your mother?’ Immediately, I knew the answer – the daughter, of course!

From then on, it was plain sailing. When I was asked what to do next, I found myself answering simply, ‘I think we should ask the com­munity nurses when they come tomorrow’. Visiting nurses, similar to the team I had been working with in Sydney, had indeed been called to help some days before I arrived. I was now free to be my mother’s youngest daughter, and enjoyed many more days of being with her in a new way, free of any professional role. Indeed, I learned more about the closeness that being with a dying relative can mean than at any other time in my nursing career. I discovered that, although my mother could not speak very well due to the stroke, she could still communicate via thought messages, if I was receptive enough.

One day, I was sitting with her, sipping my mug of morning tea, and had the sudden realisation that she was longing for a cup of tea too. She had not been able to eat or drink beyond a few teaspoonfuls for some days, but the old habit of years of pouring tea for my father at regular times during the day had not left her. As soon as she was asked, she smiled a look of grateful relief that her request had been ‘heard’ and a cuppa was duly brought for her. Although she only had a few tea-spoonfuls of that cup, it was obviously heaven for her to have it.

Another day, I noticed her gazing with extreme intensity in the direction of the shelves at the end of her bed where her family photos and little ornaments were. There was a faraway look in her eyes, as if she was gazing through a window into another world. Was she recog­nising her family history up there on those shelves, I wondered? However, the next morning, every time I came near her or did the little tasks that made her comfortable, she mouthed the words: ‘LOVE…LY’, looking at me very firmly. I realised this was more than an ordinary ‘thank you’, after it was repeated half a dozen times in the same manner. There was an almost urgent message behind this one word, ‘LOVELY’, that felt as if she was trying to get something urgent across to me.

Going on intuition, I said to her, ‘Are you trying to tell us that Heaven is lovely, Mum?’ Her response was a delighted and vigorous nodding of her head as she intoned, ‘Yes … Yes … Yes’, and smiled so sweetly, grateful that the message was delivered. It was the clearest indi­cation I had ever had of the thinning of the veil between the spiritual and physical worlds often noted at the bedsides of the dying. This was a time of sacred awareness, and all the more precious that it was my own mother teaching me these things now.

Perhaps there are some things we can only learn in this first-hand way, through what seems difficult and dangerous ‘passages’ of experi­ence. These are the lessons that are etched on the mind and memory forever it seems, and you are never the same again.

A few days later, my mother died very quietly, with her old friend sitting beside her, an eighty-year-old nun who lived and worked in the hostel. We, the family, had said our goodbyes that morning, and had taken a little window of time to be outside the building for a few hours, watching her youngest grandson play cricket in the park. As so often happens with the dying, when the family have been closely waiting in vigil, she took this opportunity to go peacefully when we were not there. She looked like a bride who was ready for the walk up to the altar as I placed flowers in a wreath around her spun-silver hair.

A ship sails and I stand watching as she fades on the horizon and someone at my side says, ‘She is gone.’ Gone from my sight only … There are others who are watching her coming and voices that take up the glad shout, ‘Here she comes.’ That is what dying is; an horizon and just the limit of our sight.             –Bishop Brent 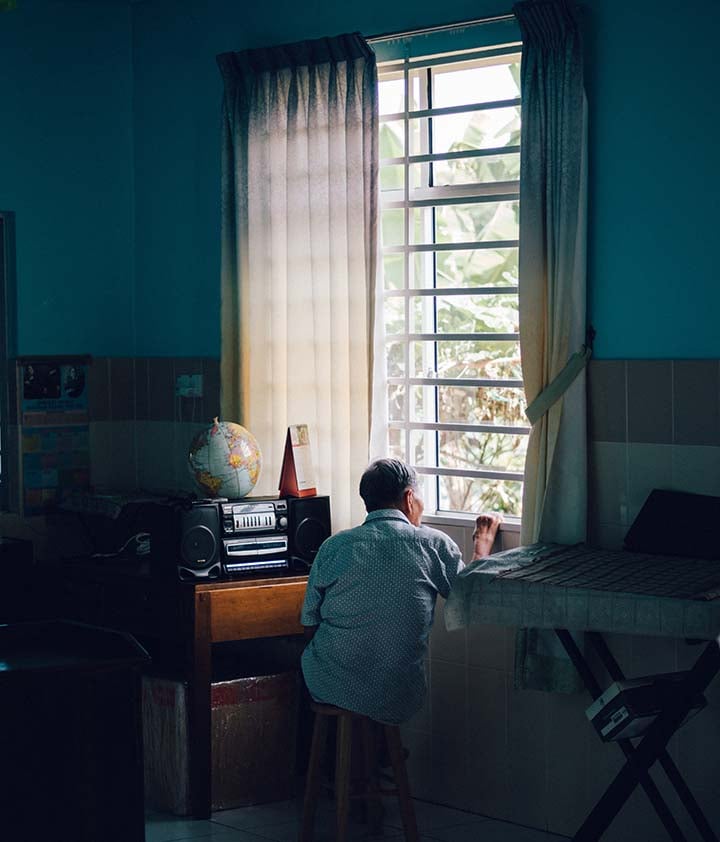 What COVID-19 has taught us about communication and caregiving

Many caregivers are the information relay point between their loved one, the healthcare team, and the wider family. This can be challenging at any time, but COVID-19 lockdowns and travel restrictions have added another layer of complexity to this task.  We asked three people to share their wisdom: a Violet Guide, a doctor and a caregiver. Ask ... 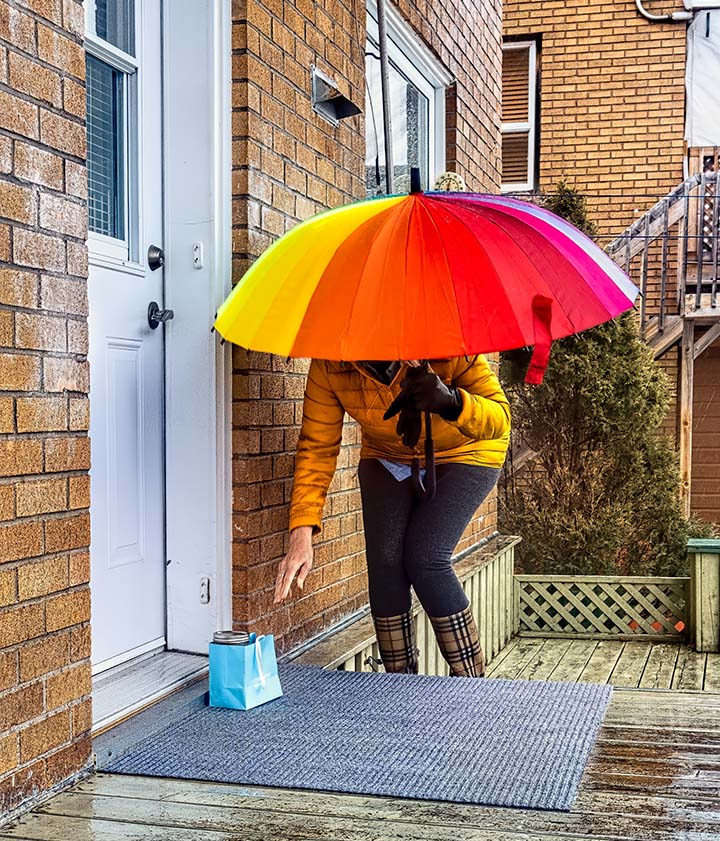 Please don't say, "if you need anything just ask."

Ruth Terracini (Violet guide Rose Dillon’s sister) was diagnosed with stage 4 cancer at the age of 39. Despite various treatments from both eastern and western medicine, Ruth died in 2015  at the age 41. She had a wonderful community of people around her who loved her dearly but despite that, like many people, she found it hard to ask for help. ...

Resourcefulness versus resilience Terri Soller, Managing Director of leadership capacity-building organisation Conversus Leaders, says talk about resilience can be unhelpful when couched in terms of toughening up. “It’s not necessarily about snapping back and recovering quickly from difficulties, but around tapping into resources we have at our ...